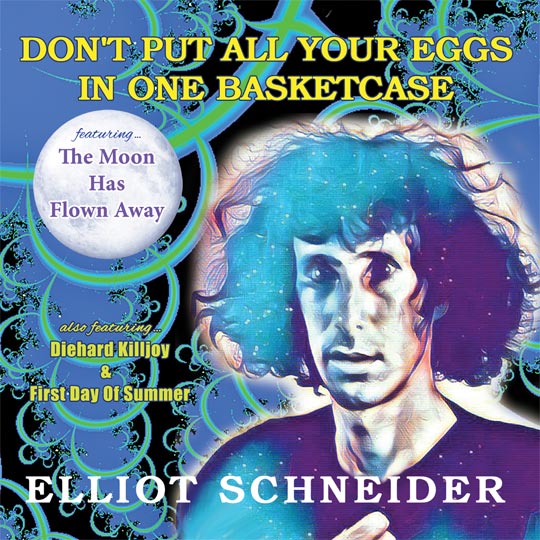 What the Infamous are Saying About Elliot Schneider!

“It’s impossible to classify him, categorize him, deny, defy or crucify him. Everything about him invites skepticism; you know right off he’s either a total flake or a total genius.”
Cary Tennis ( Salon.com’s renowned columnist for a 14-year span)
--SF WEEKLY

"I have been loving your new CD. I cranked it up all the way home from Ray Davies at the Fillmore. I keep it close in my car for instant pick up..."
--Annalisa, was the iconic DJ at KFOG in San Francisco for decades

“I know what you’re thinking! Who is that and how do I get a hold of that? Oh my goodness! He’s got that one nailed—Elliot Schneider!!! Fantastic…”
–Peter Antony, DJ at the legendary Pirate Radio Station that changed the face of British rock and roll forever in the Sixties: Radio Caroline

WHERE TO BUY
Elliot Schneider Music

CLICK HERE! Amazon New album prerelease of "Don't Put All Your Eggs In One Basketcase.'  The ALBUM PAGE: ONLY mp3s so far; can be purchased July 24th
***Preview Samples Here***

CLICK HERE! For Downloads on iTunes!
Albums Listed Below: